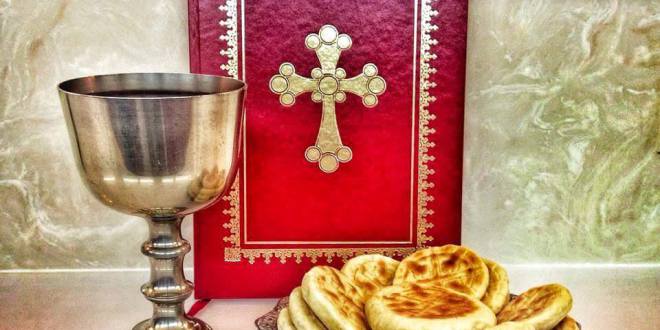 The oblation is a service offered up by those below to those above, through material elements, in hope of the forgiveness of sins and of an answer to prayer. The old oblations consisted of irrational animals and of the blood of bodies, but with us the Only-begotten of God, Who took upon Him the form of a servant, He offered His own body a sacrifice to His Father for the life of the world, and hence He is called by John, “The Lamb of God which taketh away the sins of the world.” And again it is said of Him, that “His blood is the new testament, shed for many for the remission of sin.” And again: “So God loved the world that He gave His Only-begotten Son,” Who was offered up to His Father a living, rational sacrifice for all the created, thereby reconciling the world with His Greatness, and bringing salvation to angels and to men. Now, seeing that it was impossible that His sacrifice upon the cross for the salvation of all could identically be enacted, in every place, throughout all ages, and to all men, just as it was, without any alteration, He beheld with an eye of mercy, and devised in com­passion and with great wisdom; and in that night in which He was betrayed for the life of the world, He took bread into His holy, pure, and immaculate hands, blessed, broke, and gave it to His disciples and he said unto them, this is my body which is being broken for the sake of the life of the world unto remission of sins, likewise he blessed the cup and gave it to them saying “This is My Blood of the new testament, which will be shed for many for the remission of sins. Take therefore eat all of you of this bread, and drink of this cup, and do this, whenever ye shall meet together, in remembrance of Me.” Through this divine command the bread is changed into His Holy Body, and the wine into His Precious Blood, and they impart, to all who receive them in faith and without doubting, the forgiveness of sins, purification, enlightenment, pardon, the great hope of the resurrection from the dead, the inheritance of heaven, and the new life, Whenever we approach these Sacraments we meet with CHRIST Himself and Him we bear upon our hands and kiss and in partaking thereof, we are being united with Him, His Holy Body mixing with our bodies, and His innocent Blood mingling with our blood, and by faith we know Him that is in heaven and Him that is in the Church, to be but one Body.
The matter of this Sacrament CHRIST ordained to be of wheat and wine, as being most fit to represent body and blood. The form He conveys through His life-giving word, and by the descent of the Holy Spirit.