Church of the East 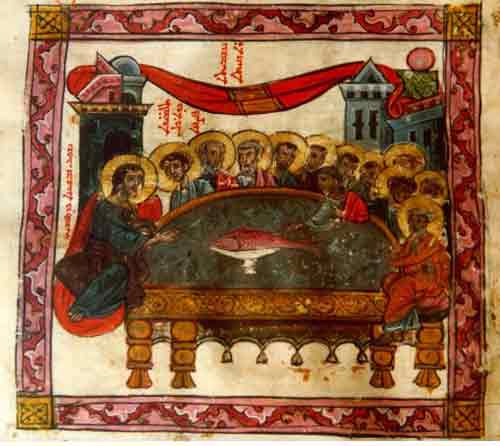 The Church of the East began during the missionary activity which took place in the Apostolic Age. Written records have been traced to the late second century of the Christian era. The numbers of people who belonged to the Church at that time, and the broad area it covered, would indicate that there had been a long period of development and growth, possibly reaching back into the first century and the time of the Apostles. Tradition in the Church of the East dates its founding in the middle of the first century.

The Church of the East developed first in what was known as the Parthian Empire, and when that empire was overthrown by the Persians in the third century it continued its development under the Persian government. This was the region lying to the east of the Roman border, stretching as far as to India. The exact location of the Church’s first congregations cannot be established from the historical record, but it is thought that it began its most serious development in the region of Kh’dayab (Adiabene) in northern Mesopotamia, spreading from there in all directions throughout the empire.

The Assyrian people of upper Mesopotamia have always been an important part of the Church of the East, though historically they were only one ethnic group among many others within the Church. However, today they represent the single surviving cultural grouping. Though the Church moved far beyond its beginnings in upper Mesopotamia, the language of that region (Syriac) remained the language of the Church, and its vocabulary, with a certain amount of Greek added in, was the source of its characteristic theological formulations.

The Church of the East is governed according to the Apostolic model of bishops, presbyters, and deacons. At the turn of the fourth century (c. AD 310) Papa bar Gaggai, the bishop of the capital city of the Persian Empire, Seleucia-Ctesiphon, organized the bishops of the Church in a form which resembled the model developed in the West. He centralized the administration of the Church under his own jurisdiction and assumed the title “Catholicos of the East.” From that time on, the bishop of the imperial capital held this office. The Catholicos became the presiding bishop over the entire Church, and his dignity and power were subsequently added to in the fifth century when he received the title “Patriarch”. This was done at a general synod called by the Catholicos, Isaac, at Seleucia-Ctesiphon in AD 410. At this synod Marutha, a representative from the Roman Emperor, brought to the assembled bishops the canons and creed of the Council of Nicea, and they were officially approved and received by the Church of the East.

Historically, the Catholicos-Patriarch governed the general synod of the bishops. The general synod was made up of all “Metropolitans” (Archbishops) and bishops. The Metropolitans were in charge of provinces, which each contained four to eight bishops. This historic model no longer exists due to the greatly reduced numbers within the Church and the dislocations of its membership. A bishop is considered legitimate if he has been ordained into the Apostolic succession by at least two (preferably more) other bishops who are themselves properly ordained and in full communion with their fellow bishops. A bishop’s legitimacy endures only so long as he himself maintains such full communion.

The Church of the East has a sacramental system which resembles the sacramental systems of the Greek and Latin traditions. The Sacraments of Baptism and Eucharist are primary, and the Sacrament of Holy Orders effects the other Sacraments. Confirmation is administered with Baptism, and Absolution is a benefit of the Eucharist, though Absolution is also administered separately during a common service of Absolution, and is also administered to individuals, with penance, in the case of serious sin. The Sign of the Cross, Unction, and “Holy Leaven” are defined as additional Sacraments.

The central feature of the worship life of the Church of the East is the Eucharist, known in the Syriac language of the Church as the “Qurbana Qaddisha”, or “Holy Offering”. The liturgy of the Eucharist is attributed to “the Apostles, Addai and Mari, who discipled the East”. The liturgy consists of a service for the catechumens and a service for the faithful. The Host is a leavened loaf, and the cup is an equal mixture of wine and water. The baptized faithful receive the body and blood of Christ under both species of bread and wine, and the “real presence” of Christ is understood in the elements. A priest ordained by a bishop in the apostolic succession is required for the Consecration, and a deacon is required to assist the celebrant. A community of worshipping believers must be present at the celebration.

Baptism is administered to infants of Christian families and to new converts. It is not given to those who, for whatever reasons, enter the Church from other Christian bodies and have already been baptized with a Trinitarian formula. Infant baptisms oblige parents and sponsors to rear the child in the Christian faith and to nourish him or her at the altar and within the community of faith. The baptismal liturgy resembles the eucharistic liturgy in form. Following an anointing with oil there is a triple immersion in consecrated water in the name of the Holy Trinity, and a final “sealing”, which is Confirmation, with the imposition of hands at the door of the altar.

Matrimony and funeral services consist largely of Psalms, anthems, and blessings. They are lengthy, colorful, and emotional occasions, and reflect ancient customs and usages.

The teaching of the Church of the East is based on the faith of the universal Church as set forth in the Nicene Creed. The mystery of the Holy Trinity and the mystery of the Incarnation are central to its teaching. The church believes in One Triune God: Father, Son, and Holy Spirit. It also believes and teaches that the Only-begotten Son of God, God the Word, became incarnate for us men and for our salvation and became man. The same God the Word, begotten of his Father before all worlds without beginning according to his divinity, was begotten of a mother without a father in the last times according to his humanity, in a body of flesh, with a rational, intelligent, and immortal soul which he took from the womb of the Blessed Virgin Mary and united to himself, making it his very own at the moment of conception. The humanity which he took for his own was assumed by God the Word, who was, thenceforth and for ever, the personal subject of the divine and human natures. His divine and human natures retain their own properties, faculties, and operations unconfusedly, immutably, undividedly, and inseparably.

Therefore, because the divinity and humanity are united in the Person of the same and only Son of God and Lord Jesus Christ, the Church of the East rejects any teaching which suggests that Christ is an “ordinary man” whom God the Word inhabited, like the righteous men and the prophets of old. The Church of the East further rejects any teaching that explicitly or implicitly suggests that there are two Sons, or two Lords, or two Christs in our Lord and Savior Jesus Christ, but we confess one Lord Jesus Christ, the Son of God, who is the same yesterday, today, and forever. The same, through his passion, death, burial, and resurrection, redeemed humanity from the bondage of sin and death, and secured the hope of resurrection and new life for all who put their faith in him, to whom, with his Father and the Holy Spirit, belongs confession, worship, and adoration unto ages of ages. Amen.

The Church of the East began in the late Apostolic age, flourished in upper Mesopotamia, and spread quickly throughout the Parthian (later Persian) Empire. Its language is classical Syriac (Aramaic), its government is episcopal, its worship is sacramental and liturgical, its theology is according to the Nicene Creed and the teaching of the fathers of the Church, its customs are Semitic, and its present attitude toward other Christians is ecumenical. It exists in greatest numbers in Iraq, Iran, Syria, and Lebanon, but also in Europe, North America, Australia, and India.