Hymns on the Nativity-Hymn II 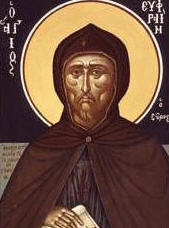 Translation. By REV. J. B. Morris

Praise to the Fountain that was sent for our propitiation. Praise be to Him Who made void the Sabbath by fulfilling it! Praise too to Him Who rebuked the leprosy and it remained not, Whom the fever saw and fled! Praise to the Merciful, Who bore our toil! Glory to Thy coming, which quickened the sons of men!

Glory to Him, Who came to us by His first-born! Glory to the Silence, that spake by His Voice. Glory to the One on high, Who was seen by His Day-spring! Glory to the Spiritual, Who was pleased to have a Body, that in it His virtue might be felt, and He might by that Body show mercy on His household’s bodies!

Glory to that Hidden One, Who even with the mind cannot be felt at all by them that pry into Him; but by His graciousness was felt by the hand of man! The Nature that could not be touched, by His hands was bound and tied, by His feet was pierced and lifted up. Himself of His own will He embodied for them that took Him.

Blessed He Who sealed our soul, and adorned it and espoused it to Himself. Blessed He Who made our Body a tabernacle for His unseen Nature. Blessed He Who by our tongue interpreted His secret things. Let us praise that Voice whose glory is hymned with our lute, and His virtue with our harp. The Gentiles have assembled and have come to hear His strains.

Glory to Him Who sowed His Light in the darkness, and was reproached in His hidden state, and covered His secret things. He also stripped and took off from us the clothing of our filthiness. Glory be to Him on high, Who mixed His salt in our minds, His leaven in our souls. His Body became Bread, to quicken our deadness.

Praise to the Rich, Who paid for us all, that which He borrowed not; and wrote [His bill], and also became our debtor! By His yoke He brake from us the chains of him that led us captive. Glory to the Judge Who was judged, and made His Twelve to sit in judgment on the tribes, and by ignorant men condemned the scribes of that nation!

Glory to Him Who could never be measured by us! Our heart is too small for Him, yea our mind is too feeble. He makes foolish our littleness by the riches of His Wisdom. Glory to Him, Who lowered Himself, and asked; that He might hear and learn that which He knew; that He might by His questions reveal the treasure of His helpful graces!

Let us adore Him Who enlightened with His doctrine our mind, and in our hearing sought a pathway for His words. Praise we Him Who grafted into our tree His fruit. Thanks to Him Who sent His Heir, that by Him He might draw us to Himself, yea make us heirs with Him! Thanks to that Good One, the cause of all goods!

Glory to the hidden Husbandman of our intellects! His seed fell on to our ground, and made our mind rich. His increase came an hundredfold into the treasury of our souls! Let us adore Him Who sat down and took rest; and walked in the way, so that the Way was in the way, and the Door also for them that go in, by which they go in to the kingdom.

Blessed the Shepherd Who became a Lamb for our reconcilement! Blessed the Branch Who became the Cup of our Redemption! Blessed also be the Cluster, Fount of medicine of life! Blessed also be the Tiller, Who became Wheat, that He might be sown; and a Sheaf, that He might be cut! [Blessed be] the Architect Who became a Tower for our place of safety! Blessed He Who so tempered the feelings of our mind, that we with our harp should sing that which the winged creatures’ mouth knows not with its strains to sing! Glory to Him, Who beheld how we had pleased to be like to brutes in our rage and our greediness; and came down and was one of us, that we might become heavenly!

Glory be to Him, Who never felt the need of our praising Him; yet felt the need as being kind to us, and thirsted as loving us, and asks us to give to Him, and longs to give to us. His fruit was mingled with us men, that in Him we might come nigh to Him, Who condescended to us. By the Fruit of His stem He grafted us into His Tree.

Blessed be the Physician Who came down and amputated without pain, and healed wounds with a medicine that was not harsh. His Son became a Medicine, that showed sinners mercy. Blessed be He Who dwelt in the womb, and wrought therein a perfect Temple, that He might dwell in it, a Throne that He might be in it, a Garment that He might be arrayed in it, and a Weapon that He might conquer in it.

Blessed be He Whom our mouth cannot adequately praise, because His Gift is too great for skill of orators [to tell]; neither can the faculties adequately praise His goodness. For praise Him as we may, it is too little.

And since it is useless to be silent and to constrain ourselves, may our feebleness excuse such praise as we can sing.

How gracious He, Who demands not more than our strength can give! How would Thy servant be condemned in capital and interest, did he not give such as he could, and did he refuse that which He owed! Ocean of glory Who needest not to have Thy glory sung, take in Thy goodness this drop of praise; since by Thy Gift Thou hast supplied my tongue a sense for glorifying Thee.