The Legend of Abgar 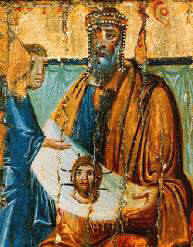 The historian Eusebius records a tradition (Church History I.12), which he himself firmly believes, concerning a correspondence that took place between Our Lord and the local potentate at Edessa. Three documents relate to this correspondence:

This legend enjoyed great popularity, both in the East and in the West, during the Middle Ages: Our Lord’s letter was copied on parchment, marble, and metal, and used as a talisman or an amulet. In the age of Eusebius the original letters, written in Syriac, were thought to be kept in the archives of Edessa. At the present day we possess not only a Syriac text, but an Armenian translation as well, two independent Greek versions, shorter than the Syriac, and several inscriptions on stone, all of which are discussed in two articles in the “Dictionnaire d’archéologie chrétienne et de liturgies” cols. 88 sq. and 1807 sq. The only two works to be consulted in regard to this literary problem are the “Ecclesiastical History” of Eusebius, and the “Teaching of Addaï,” which professes to belong to the Apostolic age.

The legend, according to these two works, runs as follows: Abgar, king of Edessa, afflicted with an incurable sickness, has heard the fame of the power and miracles of Jesus and writes to Him, praying Him to come and heal him. Jesus declines, but promises to send a messenger, endowed with His power, namely Thaddeus (or Addaï), one of the seventy-two Disciples. The letters of Our Lord and of the king of Edessa vary in the version given in Eusebius and in that of the “Teaching of Addaï.” That which follows is taken from the Teaching of Addaï,” as being less accessible than the History of Eusebius:

Abgar Ouchama to Jesus, the Good Physician Who has appeared in the country of Jerusalem, greeting:

I have heard of Thee, and of Thy healing; that Thou dost not use medicines or roots, but by Thy word openest (the eyes) of the blind, makest the lame to walk, cleansest the lepers, makest the deaf to hear; how by Thy word (also) Thou healest (sick) spirits and those who are tormented with lunatic demons, and how, again, Thou raisest the dead to life. And, learning the wonders that Thou doest, it was borne in upon me that (of two things, one): either Thou hast come down from heaven, or else Thou art the Son of God, who bringest all these things to pass. Wherefore I write to Thee, and pray that thou wilt come to me, who adore Thee, and heal all the ill that I suffer, according to the faith I have in Thee. I also learn that the Jews murmur against Thee, and persecute Thee, that they seek to crucify Thee, and to destroy Thee. I possess but one small city, but it is beautiful, and large enough for us two to live in peace.

When Jesus had received the letter, in the house of the high priest of the Jews, He said to Hannan, the secretary, “Go thou, and say to thy master, who hath sent thee to Me: ‘Happy art thou who hast believed in Me, not having seen me, for it is written of me that those who shall see me shall not believe in Me, and that those who shall not see Me shall believe in Me. As to that which thou hast written, that I should come to thee, (behold) all that for which I was sent here below is finished, and I ascend again to My Father who sent Me, and when I shall have ascended to Him I will send thee one of My disciples, who shall heal all thy sufferings, and shall give (thee) health again, and shall convert all who are with thee unto life eternal. And thy city shall be blessed forever, and the enemy shall never overcome it.'” According to Eusebius, it was not Hannan who wrote answer, but Our Lord Himself.

A curious legendary growth has sprung up from this imaginary occurrence. The nature of Abgar’s sickness has been gravely discussed, to the credit of various writers’ imaginations, some holding that it was gout, others leprosy; the former saying that it had lasted seven years, the latter discovering that the sufferer had contracted his disease during a stay in Persia. Other chroniclers, again, maintain that the letter was written on parchment, though some favour papyrus. The crucial passage in Our Lord’s letter, however, is that which promises the city of Edessa victory over all enemies. It gave the little town a popularity which vanished on the day that it fell into the hands of conquerors. It was a rude shock to those who believed the legend; they were more ready to attribute the fall of the city to God’s anger against the inhabitants than to admit the failure of a safeguard which was no less trusted to at that time than in the past.

The fact related in the correspondence has long since ceased to be of any historical value. The text is borrowed in two places from that of the Gospel, which of itself is sufficient to disprove the authenticity of the letter. Moreover, the quotations are made not from the Gospels proper, but from the famous concordance of Tatian, compiled in the second century, and known as the “Diatessaron”, thus fixing the date of the legend as approximately the middle of the third century. In addition, however, to the importance which it attained in the apocryphal cycle, the correspondence of King Abgar also gained a place in liturgy. The decree, “De libris non recipiendis”, of the pseudo-Gelasius, places the letter among the apocrypha, which may, possibly, be an allusion to its having been interpolated among the officially sanctioned lessons of the liturgy. The Syrian liturgies commemorate the correspondence of Abgar during Lent. The Celtic liturgy appears to have attached importance to the legend; the “Liber Hymnorum”, a manuscript preserved at Trinity College, Dublin (E. 4, 2), gives two collects on the lines of the letter to Abgar. Nor is it by any means impossible that this letter, followed by various prayers, may have formed a minor liturgical office in certain churches.

The account given by Adda contains a detail which may here be briefly referred to. Hannan, who wrote at Our Lord’s dictation, was archivist at Edessa and painter to King Abgar. He had been charged to paint a portrait of Our Lord, a task which he carried out, bringing back with him to Edessa a picture which came an object of general veneration, but which, after a while, was said to have been painted by Our Lord Himself. Like the letter, the portrait was destined to be the nucleus of a legendary growth; the “Holy Face of Edessa” was chiefly famous in the Byzantine world. A bare indication, however, of this fact must suffice here, since the legend of the Edessa portrait forms part of the extremely difficult and obscure subject of the iconography of Christ, and of the pictures of miraculous origin called acheiropoietoe (“made without hands”).